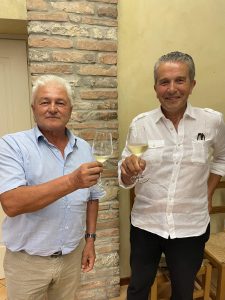 Sandro Gini, enologist, born in 1958 and co-owner of the “Gini Sandro e Claudio” wine company, has been reconfirmed President of the Consorzio Tutela Vino Soave for a second mandate 2021-2023.

He was elected unanimously by the new board of directors seated this past June: Cristian Ridolfi, Claudio Tamellini, Emanuele Vicentini, Fernando Viviani, Giovanni Verzini, Gaetano Tobin, Giovanni Nordera, Laura Rizzotto, Massimino Stizzoli, Massimo Meneghello Canoso, Matteo Inama, Paolo Fiorini, Roberto Soriolo, and Wolfgang Raifer.
The president will be joined by Massimino Stizzoli and Matteo Inama, elected vice-presidents while the statutory board will be led Mauro Pernigotto with the support of Paolo Domenico Chignola and Alberto Bellieni.

The work of the new presidency will focus on plans for a vigorous renewal of the denomination starting from the Geographical Units and the vineyards. Particular focus will be on regulations, in terms of applicability and enforcement. In large part, these regulations will govern environmental sustainability, and put conscientious viticulture front and center. The number of organic farms in Soave is in continuous expansion (4% in the doc, 10% in the classic), and several wineries are in the process of conversion.

An orientation towards green practices was adopted by the entire area thanks in part to an integrated sustainability protocol introduced in 2020 and aligned with a broader project initiated by the Veneto Region.

Another key point is the preservation of the Soave landscape recognized by the United Nation’s Food and Agriculture Organization (FAO). The 2018 recognition led to a strong push to protect the characterizing elements of our landscapes, such as the Veronese pergola or dry-stone walls. The next mandate will see the Consortium play an active role in stimulating even more maintenance, surveillance of critical issues and joint work with the municipal administrations to effectively intervene within and between municipalities. The will is to encourage the development of wine tourism and to create suitable routes through the vineyards.

“I resume my mandate aware that the world has profoundly changed.”, says Sandro Gini, President of the Consortium. “In the future there will be a need for responsible, targeted and above all effective actions towards the members of the denomination. I hope among the members to join and share the common objectives which must be to increase the value of the bottle of the denomination, to dedicate greater attention to the environment and sustainable practices, and above all, to stimulate dialogue with institutions. These are ambitious goals that require the commitment and also the passion of every Soave producer.”