ON THE ROAD TO SOAVE

ON THE ROAD
TO SOAVE

Between cellars, villas, churches, history, gastronomy and unique landscapes. Here we are in the land of Soave, a land of vineyards, wineries, villages. Soave is a wine region, but it is also a medieval town, enclosed in an intact three-tiered medieval wall that climbs the hill to protect the Castle at its summit. 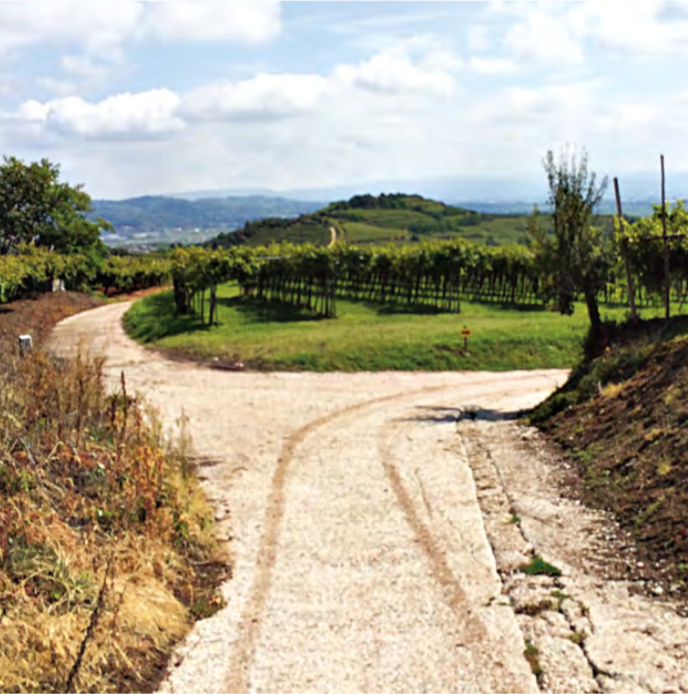 Soave, once a Roman garrison, was almost certainly re-founded by the “Svevi” a nordic tribe, conquered by the Longobards and eventually was fortified by the ruling Scaligeri. Inside the walls you can visit Palazzo San Bonifacio, Palazzo Cavalli, the Church of San Lorenzo, the Palazzo di Giustizia and Palazzo del Capitano.

Exit the North Gate of Soave and turns West passing the bridge over the Tramigna stream until you reach the hamlet of San Vittore, known for its imposing parish church and patrician villas. The road rises to the Colognola ai Colli, a delightful town nestled in the hills that descend into the Illasi Valley. The area boasts numerous Roman ruins, the remains of the majestic Villa Spinola with its secret park and the impressive 17th century Villa Perevelli.

South: Caldiero boasts the Thermal baths of Giunone
North: the road continues along the Illasi Valley beyond the Soave denomination
West: The suggested route leads to Pieve and the Romanesque Church of Santa Maria which was probably built on the ruins of a temple dedicated to Mercury.
From here the road reaches Ca ‘dell’Ara up to the locality Quattro Strade. You can continue on to San Martino Buon Albergo to visit the sanctuary of San Giacomo, or turn right toward Marcellise to admire the famous Villa Girasole. From there, you reach San Pietro di Lavagno, the municipal center of a group of hamlets, some with protohistoric origins. The village is surrounded by villas. Noteworthy is the grandiose sixteenth- century Villa Verità-Montanari, called “Il Boschetto”.

Proceed to Mezzane di Sotto, a small town nestled in a beautiful green valley. The area is famous for the olive groves. Skirting the hill you arrive at Illasi and the impressive Villa Perez Pompei-Sagramoso and the large park which extends on up to the ruins of the Scaligero castle. The Illasi Valley route is particularly scenic, with centennial olive groves, vineyards and cherry orchards. From the hill top, you can enjoy a panoramic view of the Soave castle, the Berici hills and the Euganean hills. The road runs headlong towards Cazzano di Tramigna and the Valley of Cherries, “Valle dei ciliegi”, an extraordinary sight during the flowering period.

In San Colombano, there is an exemplary 12th century church immersed in green. From here the road narrows and continues to through forests and vineyards until you reach the road heading back to Soave.

At this point, we recommend continuing towards Soave until you pass the village of Costeggiola. At the locality of Carcera, turn left to admire the panoramic views from Castelcerino and Fittà. From Fittà, we suggest taking the Castellaro road to Brognoligo. You’ll pass by some of the best Cru vineyards, and on the left you follow the Val d’Alpone from Roncà to Bolca. 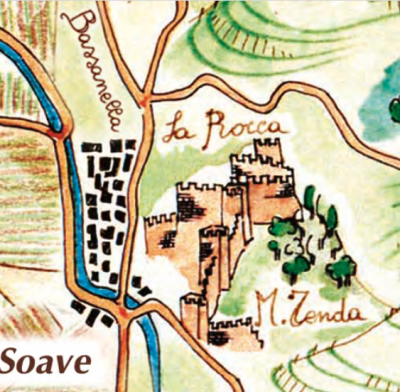 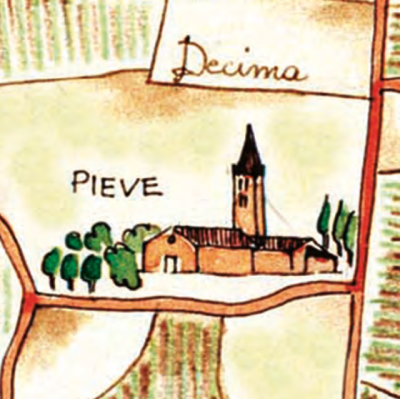 From Brognoligo, the Strada del Soave continues on to Costalunga and then to Montecchia di Crosara, a wine- growing center of considerable importance. From here the road bends towards Roncà and the Terrossa district, ancestral lands of the Cimbra.
Roncà is home to a new Fossil Museum. On display are an incredible array of the gastropod and nummolite fossils typical in the area. Continuing north along the Vai d’Alpone is San Giovanni Ilarione. The town is located at the foot of Lessinia and is a good starting point to reach the Regional Natural Park through Vestenanova and Bolca to reach Campofontana. 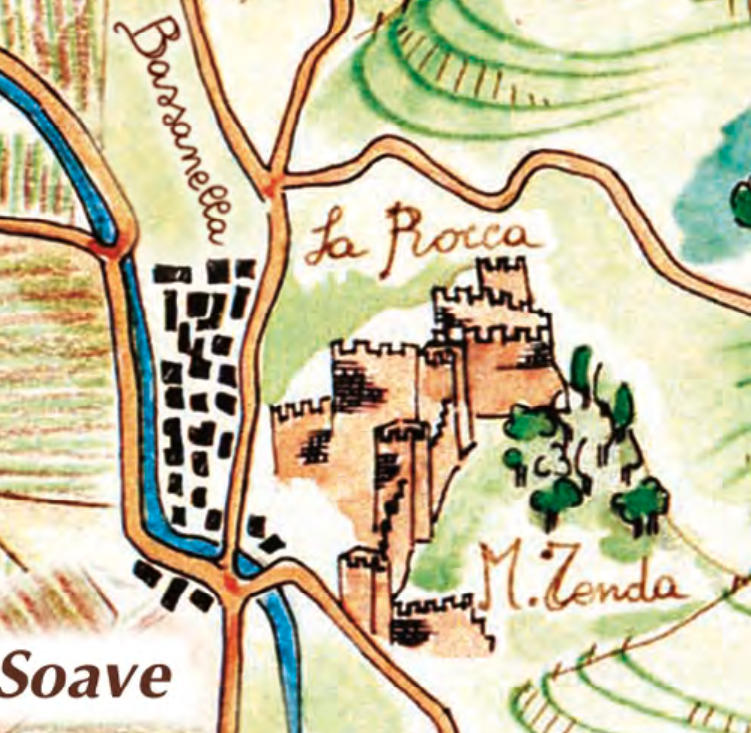 Bolca is one of the most important centers of the Lessinia. and is a world renowned center for fossils. The museum exhibits fossils from over 50 million years ago.

On the return, stop in Monteforte. In the center of the village stands the imposing parish church of Santa Maria Maggiore with its neoclassical facade and the very high Bell tower. A few steps from the church is a fifteenth century Episcopal Palace. During the Roman Empire, Monteforte was a fortress town. A castle was erected on its remains in the 10th century, and subsequently became the Church of Sant’Antonio Abate in the 14th century.

Before heading back to Soave, we suggest visiting the Abbey of San Pietro in Villanova di San Bonifacio.