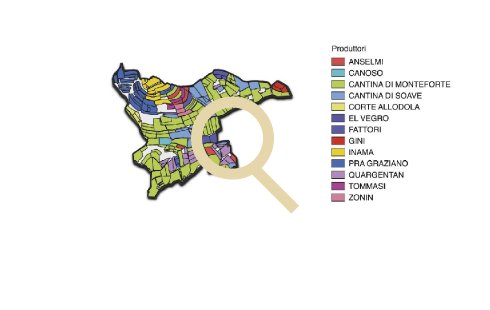 From an etymological point of view, the evolution of the term leads us to “Pontara” a dialectal translation of “climb”. We are actually in a hilly area even if the slope gradients are very slight, between 5%- 20%.
In fact, the Ponsara geographical unit connects the flat areas of the Val Ponsara with the Cru zones of Foscarino, Pigno and Froscà.
It is a very harmonious amphitheater with different exposures both to the north / east and south / east.
From a pedological point of view, the origin is essentially volcanic and therefore, is known for its very dark soils with a loamy clay texture on the surface, with reddish soils of a more loamy texture in depth. Being a valley sheltered from the north by the Foscarino mountains, and from the south by Froscà, the statistical data of the last 20 years define the climate as fresh with good rainfall compared to other nearby areas.