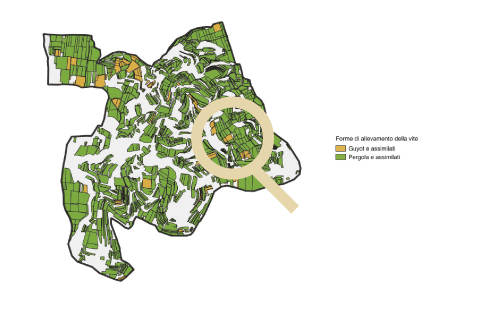 It is a rather large area that develops in the hilly areas of the Municipality of Colognola ai Colli, and includes the sub-zone Colli Scaligeri. It contains many welknown toponyms;, including Casale, Ceriani, Bocca Scaluce, Monte, Cubetta, Orgnano and up to the hamlet of San Vittore.
On the slopes, the soils are on average deep and mainly consist of stratified calcareous rocks of marine origin that we find in the form of calcareous compact rock within the first 100 cm. The texture is clayey on the surface and from clayey to very clayey in depth. The soil is moderately alkaline and the slopes are moderately steep. On the top, however, everything changes, with soils of basaltic matrix with clayey texture on the surface and somewhat sandy in depth.
The climate is characterized by below-average rainfall and average daily temperatures in the norm, even if the daily temperature ranges widen near harvest.
The vineyard surface is not as intensely planted as in the Soave Classico, leaving space for other crops, especially olive groves and cherry orchards, as well as woodlands and brushlands with various species.