High temperatures and heavy rains in April led to a rapid development of the vines, while more temperate climate and the absence of significant rains in May and June resulted in a good early start of the season. The rains in July were providential. There were episodes of hail that however, because of their limited magnitude and territorial extension, did not create significant difficulties for the growers. The rains of the last days of August then helped the hill area to overcome the stress caused by the high temperatures of the entire month. The heat of August and the temperatures well above the average favored the optimal development of the grapes while the rain, which fell sporadically, facilitated the ripening of the grapes. The forecast that was very positive even in terms of gradation was later fulfilled. The Garganega harvest started on September 11th and was characterized by perfect and healthy grapes in sparse and well distributed clusters. 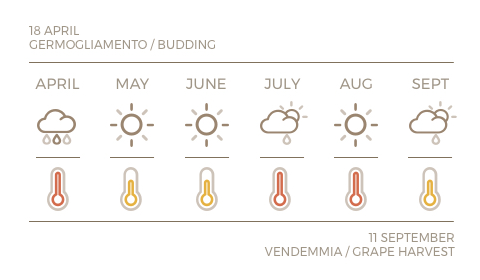