The absence of precipitations that accompanied most of the winter season created problems of drought in some areas.
The budding initially was irregular, especially on young plants.
This phenomenon was less pronounced for the Garganega, thanks to warmer temperatures in April and May, which anticipated and accentuated its vegetative development.
The low temperatures in early June slowed this development and prolonged the period of flowering. The Garganega therefore was sparse during the fruit-set phase indicating a potential high quality.
The return to traditional temperatures in June and July and still lower temperatures in the 2nd and 3rd decade of July, did not allowed for advances in the harvest period. Quite heavy rainfalls during the growing season created phytosanitary problems in some areas, especially for downy mildew and botrytis. 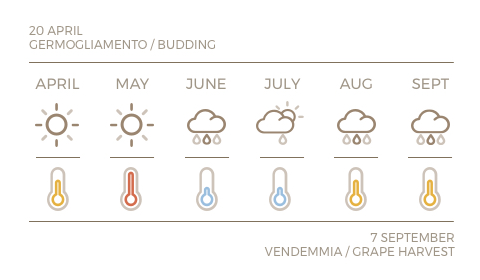