In the season 2003 was recorded, as in the previous few years, an early begin of all the vegetative stages (8/10 days in advance). Budding started for the Garganega around April 19th. The absence of the usual spring rainfalls led to a period of drought and some irrigation interventions were needed in some areas.
The flowering and fruit-set stages were optimal, allowing the development of sparse clusters (flowering from 20th to 27th May, fruit-set from June 6th onwards).
The rains were scarce, but critical in some areas. There were on average 150 mm of rain, well below the average of the previous years.
Apart from some desiccation, due to drought, there was no particular problem with diseases. Downy mildew never appeared, powdery mildew appeared only sporadically and without causing damage.
In August, the situation with heat and drought did not change much, if not around the 20th, with scattered thunderstorms that brought a bit of relief to the vineyards (in total fell about 20 mm of rain).
With the arrival of September, the temperatures were restored to their seasonal values (cool at night and warm during the day), which allowed a recovery in the maturation process of the grapes. 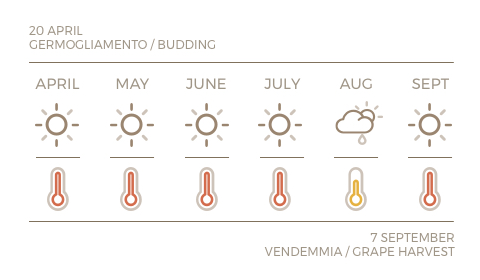