The low temperatures of the 2004 season and the continuous rainfall in the spring delayed initially the vegetative development of the Garganega.
In April the conditions improved thus favoring the budding of the vines, which started around 22 -29 April, and the flowering, in some cases disturbed by frequent rains, which occurred between 4-16 June. During the fruit-setting phase the bunches were sparse, a good premise for an excellent year. The continuous rainfalls also favored however, even from the budding stage, the attacks of downy mildew, which occurred quite aggressive and virulent. The first stains were found in early May with a very abundant sporulation.
On July 1st some of the Soave territory (from Cazzano, Costeggiola, Carcera, Campagnola, part of Montetondo, Zoppega, the center of Monteforte, Polesan etc…) was hit hard by hail, fortunately only in small and limited areas.
The month of August with very low temperatures and short rainfalls proved optimal for the Garganega, which made use of the temperature range to achieve optimum ripeness, completed then in September with its fully sunny days. 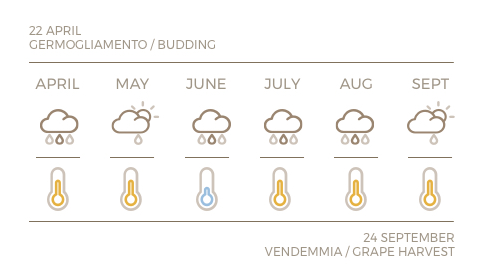