After a difficult start to the 2006 season for the Garganega was among the best in recent years.
The prolonged winter cold into the spring caused a delay in the budding break of at least a week and the full vegetative development was blocked between late May and June 1st by a sudden drop in temperatures. The Garganega in full bloom suffered from this situation. The fruit setting showed sparse clusters, a prelude for excellent quality. This natural thinning allowed vines to have a very balanced production.
This situation was fairly widespread throughout the territory.
Later, the sun at the end of June and in July fostered an ideal development of the clusters also protecting them from any phytosanitary problem in fact the actions against powdery mildew (oidium) and downy mildew (peronospora) were particularly small.
There was some apprehension, at the end of July, for the risk of water stress especially for the high hills. Fortunately, the timely and well distributed rains in the first weeks of August and the lowering of temperatures, allowed for the Garganega an excellent ripening, recovering part of the vegetative delay.
The vineyards were therefore in the best physiological conditions to address the crucial stage of maturation. The numerous surveys and inspections conducted by the consortium’s technicians confirmed that the vine growers, with appropriate thinning, were involved in returning the balance in the few vineyards that were likely to remain outside the production’s limits required by the regulations.
23 APRIL germogliamento/budding 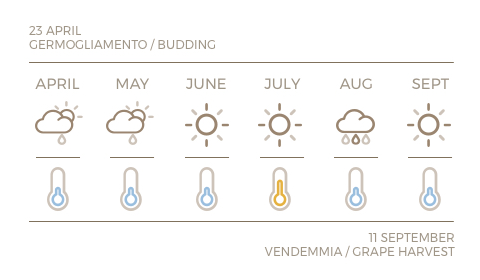