The 2008 season will be remembered as one of the most regular among the few previous years, with temperatures in line with the average for the period and with a moderate and regular rainfall pattern.
The discrete rainfalls and snowfalls, especially during the winter months, contributed to replenishing the water resources, in some cases decreased by drought in previous years.
After an average mild winter, there was a return to cold temperatures in March and early April. The budding of the vines was normal while the bloom was disrupted by rain and low temperatures. These factors contributed to a natural thinning of the bunches.
The arrival of the warm temperatures in May, brought the vines to normal growing conditions with the Garganega pre-blooming and the early varieties in bloom. The development and maturation of the grapes, sparse and of good quality, remained regular and in line with the average for the season.
The heavy rainfalls in June generally favored the vegetation, while the damages from pests in the Soave area were small.
From a qualitative point of view the bunches of Garganega were slightly more elongated and with differentiated grapes.
The physiological condition of the grapes was excellent at the time of harvest, which started in mid-September. 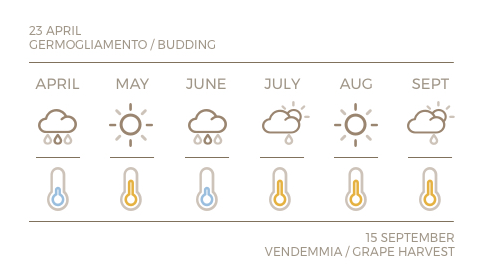