The 2009 harvest season was characterized by three distinct phases.
The first phase, from the budding to the veraison stage, led growers to considerable optimism. The winter rainfalls which effectively restored the water supply in the aquifers, the rains in late April and late June, combined with high temperatures in May, had a positive impact on the Garganega grapes.
The clusters were rather elongated with well sparse and evenly distributed grapes, a balanced vegetative stage at least 10-15 days in advance were significant signals of a great harvest season.
The extreme heat of August however, in fact halted the ripening process, in part by slowing the conversion of acids into sugars, partially dispersing an important fraction of the acid component. The concern was evident in the vineyard even if the analytical data constantly monitored by the Consortium was encouraging. From observations and comparisons with the past, emerged a slight decrease of terpenic aromas and therefore of the floral sensations, while there was a considerable increase in norisoprenoids. The heat of August therefore, affected significantly the composition of the aromatic structure.
September’s seasonal pattern, which has always been strategic for the qualitative aspects of the Garganega (a late variety), was ideal. It featured a marked recovery of the night/day temperature excursions and with the substantial absence of precipitation. The data of the end of September, especially in the aromatic composition, proven that in a satisfactory manner.
The Garganega appeared in fact markedly characterized by a high presence of benzenoid and norisoprenoids, especially methyl salicylate, the bearer of resinous and balsamic scents and the Garganegàs the more typical precursor. Another analytical result to emphasize is the remarkable rise in norisoprenoids, the precursors of the sensations of exotic and ripe fruits. 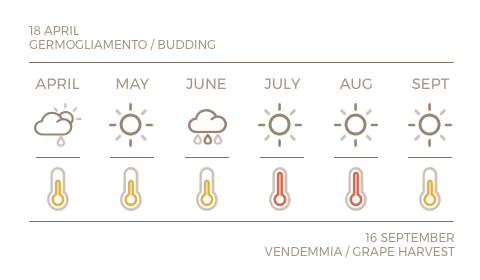