Balance was the key word that characterized the 2010 harvest for the grapes of Soave.
Despite a rather unusual weather pattern, with peaks of heat recorded especially in the month of July, followed by sudden drops in temperature in the first ten days of August and in September, the Garganega, the mother grape of Soave, showed average values with regards to the grapes’ health, the sugars and acids levels, and the presence of aromas.
In particular, the ripeness of the base grapes was delayed by a few days compared to 2009, to the benefit of a slow and gradual maturation with higher sugar values in the finish.
From the aromatic standpoint, the temperature ranges of August and September favored the formation of terpenes, the aromatic precursors which gave the wine some markedly floral notes, balanced with good presence of norisoprenoids, originated from the July’s high temperatures, which create the typical aroma of ripe fruit.
The plants were in good health and the Garganega bunches were rather sparse, therefore in the best conditions to bring about optimal ripeness.
From the qualitative point of view the harvest was in line with the previous year’s figures. Diversification of production and reduction of yields at 13 tonnes per hectare meant for the Soave, in the 2010 harvest, not exceeding the 450,000 hectoliters confirming an already well-defined qualitative balance between production and consumption. 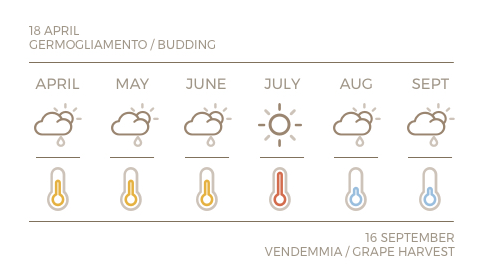