After a rainy and prolonged winter, there was an early and warm spring with temperatures above the seasonal average.
Between March and April there were only 100 mm of rain, against the 160-200 mm that are the average for the period.
This situation of abnormal heat led all crops, including vines, to an early budding (12 days earlier than normal). The vegetative activity began in the first days of April, prompting fears regarding possible frosts which however did not occurred.
The above-average temperatures instead encouraged further vegetative growth, the early varieties started blooming on April 28th and the Garganega around May 4th. All about 10-15 days early compared to a normal season.
The rains in June brought the water needed for the enlargement of the grapes, and it was providential because was about to begin a period of drought.
It was thought that such weather disturbance would bring a drop in temperature and therefore would slow the vegetative process that instead continued fostering further development of the vines.
The good weather continued encouraging the growth of the grapes with clusters for the Garganega that were sparse and of good size.
There was a bit of concern in the last ten days of August because of an exceptional heat wave. With the arrival of the rains the normal maturation of the grapes resumed, bringing the regular increase in sugar content, the setting of good acidities, and an interesting aromatic properties.
For the early varieties the harvest was carried out around August 10th, while for the Garganega it started in the second week of September, confirming the expected 10-day advance with respect to the average of the previous seasons.
10 APRIL germogliamento/budding 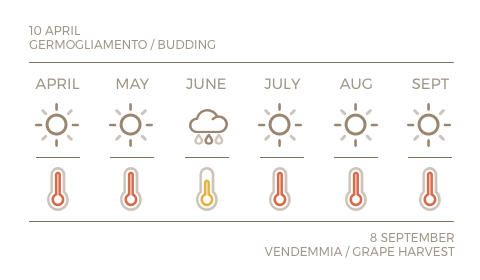