The seasonal pattern was characterized by a dry, very cold, and prolonged winter which was followed by a cool and very rainy spring, with temperatures slightly below the average.
The abnormally warm temperature in late March spurred an early budding, the vegetative activity started in the first days of April, prompting fears regarding possible frosts which however did not happened.
In April began an important rainy phase, useful in mitigating the soil’s water deficit because of a monthly contribution, varying according to the area, between 90 and 110 mm; the low temperatures slowed the vegetative growth and accentuated the differences even within the same variety.
Towards the middle of May began the phenological stage of flowering for the early varieties (Chardonnay and Pinot in particular). Such phase occurred about 5-7 days in advance of the average and showed nuances within the same vineyard.
The flowering started at the end of the first decade of June, a period characterized by unstable weather conditions which increased the irregularity of the vegetative phase, affecting the fruit setting phase and encouraging the millerandage phenomenon in some areas. From a structural point of view instead, the grapes at the end of June were already somewhat sparse and more elongated than in previous years.
June, July and August were characterized by an almost non-existent rainfall which helped maintaining an excellent state of health of the Soave vineyards.
The rains in September favored the development of the grape bunches, which were healthy and good in size, while the significant difference in temperature between day and night played to the advantage of white wines, characterized by a marked floral nuances.
The harvest began in midSeptember, a few days later than in 2011. 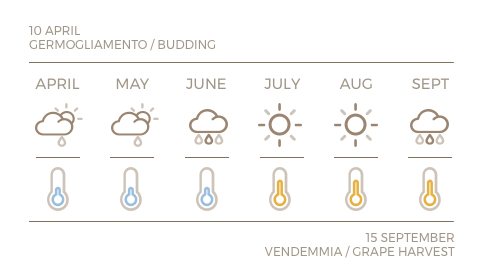