The seasonal pattern in 2013 was marked by a rather dry winter, not particularly cold but prolonged, that was followed by a spring of exceptional rainfall and with temperatures well below average.
The month of May, especially in the second half, recorded unusual levels of rainfall. As far as the temperatures, the low values slowed the vegetative growth and accentuated the differences even within the same variety.
The efflorescence started around the middle of June, a period characterized by a more stable weather pattern that helped reducing the irregularity of the vegetative process, even though the fruit-set stage was nevertheless affected and the phenomenon of millerandage was almost generalized.
The grape bunches at the end of June were already sparse compared to previous years, a situation that led to expect a slight decline in production in terms of quantity, but excellent in terms of quality, also because of the good ventilation of the grapes.
The beginning of the Garganega harvest in Soave was in a period closer to tradition and normality: from the 20th to the 30th of September. 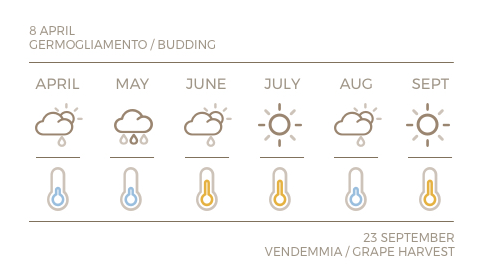