As elsewhere in parts of Italy, Soave’s 2014 vintage will be remembered as one of the most difficult, for its abnormal climatic conditions.
After a rainy spring with average seasonal temperatures, budburst began around the first week of April, slightly earlier than the historical average.
The phenological phase of flowering for the precocious varieties (in particular, Chardonnay and Pinot) began in May, a month with unusually heavy and frequent rainfalls. This caused a slight delay in the vegetative growth, a delay which persisted for the rest of the growing season.
The flowering of the garganega began around midJune, a period characterised by more stable, seasonal weather, which helped reduce the irregularity of the growing phase and also boosted optimism among the producers.
From July onwards, it was a summer almost entirely without sunshine, which delayed the ripening of the grapes. August had a record 25 days of rainfall with below average temperatures.
This cool and rainy summer left producers constantly at work to watch over and manage the precarious state of the vines and the grapes.
Fortunately, September and on into the first ten days of October, the weather was nearly perfect, mild and sunny, particularly at the beginning of October. This permitted the grapes to recuperate and reach maturity, as well as creating the conditions for a harvest with dry grapes at just the right moment.
From a qualitative point of view, we had grapes with more evident acidity and a slightly lower sugar content compared to warmer vintages like 2011 and 2012. 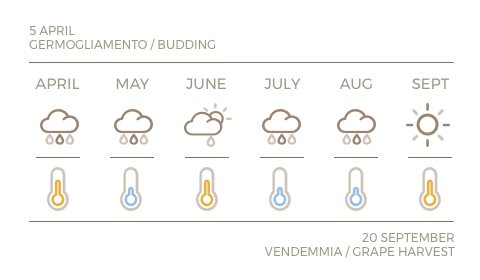