The winter of 2014/2015, with its mild temperatures, did not allow the vines to rest completely, so that the vines were a bit sluggish in starting their new vegetative cycle in the spring.
Nevertheless, the start of the vegetative phase for Garganega began extremely well, with bud-break taking place a few days early and flowering in the first week of June, partly thanks to temperatures that were always in line with the norm, with alternating fine weather and welcome rains.
April and May provided the Garganega vines with the right conditions for recuperating their vegetative resources, but as early as June the high temperatures began to subject the plants to considerable heat stress.
The weather conditions then became really extraordinary in the months of July and August, which were characterized by temperatures that were regularly above average, with exceptional heat waves and an almost total lack of rainfall. As the weeks passed in July, the great heat was accompanied by a shortage of moisture, causing in some cases real water stress; this situation carried on through the month of August as well, again with record high temperatures. There was rainfall at the end of August, though, which allowed the grapes to ripen completely. If on the one hand this situation allowed for excellent management of the vines’ health, with sprayings limited to an all-time low, on the other the relentless high temperatures slowed down the normal photosynthetic and vegetative activity of the Garganega vines. The high daytime temperatures in fact forced the plants to close their stomata from the early hours of the morning onwards, so as to reduce the dispersion of moisture; this led to a slow increase in sugars and a reduction in acidity.
The analysis of the grapes prior to vinification leads us to expect wines that are fruity rather than floral on the nose, and which are generally tangier but less acidulous than the norm. 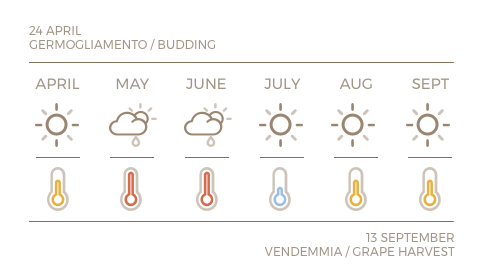