Winter 2015/2016 had a low rainfall rate, except of February. Temperatures were above the historical average.
The season registered an optimal early shoot for Garganega, with budburst in advance. Even in May, the weather situation was optimal.
Flowering in June felt the effects of low average temperatures and high rainfall in the first 15 days, causing millerandage that affected the fruit set.
Even in sanitary control, some areas disclosed some problems of downy and powdery mildew, overtaken in July, that was characterized by not elevated temperatures but no rain at all. It rained regularly in the first days of August, leading the vineyards towards a full and optimal ripeness.
2016 vintage could be defined a synthesis of the two previous vintages: on one side the optimal management of diseases, with very low spraying, like 2015; on the other, high rainfall in June and August that helped the normal photosynthetic and vegetative activity. Optimal diurnal range at the end of the ripening period. The harvest was distinguished by no hail, healthy grapes, vegetative vines balance, production not too exuberant, an average and balanced acidity and sugar rate, but with high qualitative opportunities for the other compounds.
The analytical framework of grapes in vinification bring us to expect more “classic” wines, probably more floral and salty. 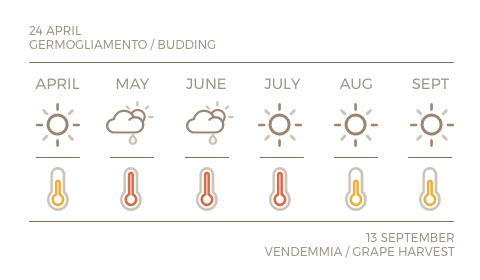