The 2017 vintage can be described as one of the most complex and difficult to manage in at least 30 years.
A lack of precipitation, even during the winter, along with sustained high summer temperatures had a preponderant effect on the growing season. Frost, drought and some hailstorms impacted the yields in a limited area.

The 2017 vintage got off to an early start with high temperatures in March and early April. Bud break came early, especially for precocious varieties. Severe frost on the 19th and 20th of April caused damage and reduced yields, mainly in the Val d’Al- pone plains. The late budding Garganega recupe- rated fairly well in the following months.

The situation was very different for the 5.000 hecta- res in the hills and foothills, where the quality and he- alth of the grapes was perfect, even though yields were somewhat compromised due to extended periods of drought and heatwaves.

In June, there was an explosion of growth helped by dry sunny weather. Both the flowering and fruit settings were perfect, without hardly any perno- spera and oidium. High temperatures throughout July, which peaked in the first two weeks of August, slowed photosynthetic activity in the younger vines and reduced the yields.

Differences in soil, vineyard age, location, irrigation, vine-training systems had a marked impact on how well the vines adapted to the extreme heat and drought throughout the growing season. Some vi- neyards, especially those hit by the frost, were har- vested twice due to differences in ripening. Rain in early September brought some relief.

The Garganega harvest began about 10 days ear- ly in mid-September but continued well into the se- cond half of October, as usual.
Despite the difficulties, grapes arrived at the presses healthy and with high quality. Sugar levels were wi- thin a normal range. Wines will be similar to the 2015 vintage: more full and robust. Garganega often has an advantage in hotter seasons due to the late harvest (benefiting from cooler weather and some rainfall), and the traditional pergola which seems to offer more protection during complicated growing seasons. 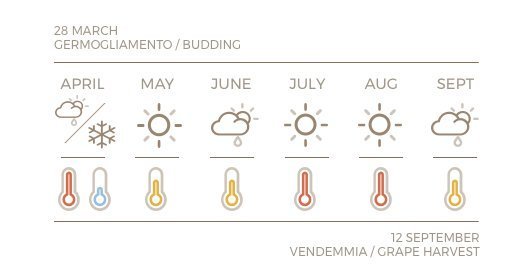